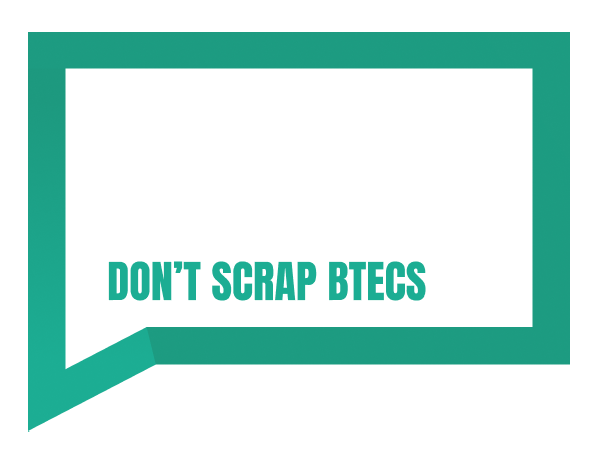 In July 2021, the Department for Education confirmed plans to replace this three-route model with a two-route model of A levels and T levels (a new suite of technical qualifications), where most young people pursue one of these qualifications at the age of 16. As a result, funding for the majority of BTEC qualifications will be removed.

The #ProtectStudentChoice campaign coalition of 30 organisations that represent and support staff and students in schools, colleges and universities is deeply concerned about this plan. In our view, it is far too simplistic, and many young people will continue to be better served studying a BTEC rather than an A level or T level-only study programme. Our shared priority is to #ProtectStudentChoice by ensuring that AGQs continue to play a major role in the future qualifications landscape. You can read our joint position statement here and our joint letter to the Secretary of State for Education here.

We need the support of school and college leaders, governors, students, parents, teachers and support staff to make the campaign a success.  There are lots of ways to get involved, for example:

For more information about getting involved email us at info@protectstudentchoice.org.

Elda's Story
Elda arrived in the UK from Portugal aged 16 able to speak only a little English. She had to work part-time to support herself and was working nights as an office cleaner in Oxford Circus until 7am then traveling to college by bus, a journey of an hour.
Read More
Rachel's Story
Rachel's mixed programme of A levels and BTEC helped her gain the coding skills that got her a prestigious Level 6 apprenticeship at Deloitte.
Read More
Jessica's Story
Jessica's BTEC at Newcastle College, along with her industry experience in hospitals and at her local Covid vaccination centre, has set her up to become a paediatric nurse.
Read More
Teanna's Story
Teanna Maguire studied BTECs in Health and Social Care and Applied Science at Sir John Deane's College and became the first person in her family to go to university, studying midwifery at Manchester. She drew on her own experiences of intensive treatment for a disability as a chi...
Read More
Fitzgerald's Story
Fitzgerald's Civil Engineering BTEC at Leeds College of Building allowed him to continue learning through Covid-19 and then to gain a coveted position as a higher level apprentice for Leeds City Council.
Read More
1 / 5

Protect Student Choice is the campaign of a coalition of educational organisations and representative bodies, co-ordinated by the Sixth Form Colleges Association.

Your browser is out-of-date!

Update your browser to view this website correctly. Update my browser now